NEW POLL: 10% DROP IN SUPPORT AS MORE VOTERS ARE SAYING NO TO A CON CON

Monday, April 24, 2017: (Uniondale, NY) – Siena Research Institute (“SRI”) released its latest poll on the pending November 7th vote on whether to hold a state Constitutional Convention.  Support has dropped 10 percent in the past 11 months.

“As we get closer to the November 7th vote, New Yorkers are beginning to pay attention. As voters learn more they realize a conclave is nothing more than another government boondoggle that will spend taxpayer money to boost the government pensions of the delegates and line the pockets of the special interests,” stated Anthony M. Figliola, Co-Author of Patronage, Waste and Favoritism – A Dark History of Constitutional Conventions.

SRI recorded the LOWEST amount of support in 7 years (since June 2010).  Support had been increasing in previous polls, although  most respondents said they knew little to nothing about the convention.  However, support has dropped 10 percent since May 2016 as voters have become more informed on the issue.

Jerry Kremer, Former Assembly Ways and Means Chairman who was in office during the 1967 Convention said, “There is no pressing public issue that is driving the call for another convention.  There are certainly many issues that the legislature must debate, but voters are speaking up and they don’t believe that a Con Con is the vehicle to deliver the need reforms – that’s the job of the legislature.”

The poll clearly shows that the more voters learn about what a Con Con really is, they are leaning against it. 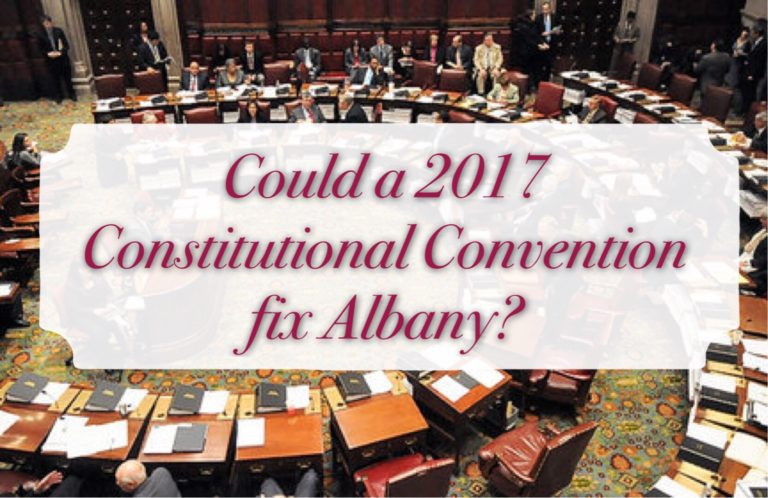 If you’re rolling your eyes and thinking, what a waste of time and money, you are not alone. Already, naysayers are pointing out the cons of a ConCon. Last month, lobbyist and former Assemblyman Jerry Kremer stopped by the newsroom to give us chapter and verse (and a book he wrote on the subject) on why constitutional conventions will be the No. 1 issue next year and why they are an unnecessary boondoggle. “The system is legally rigged,” he said, sounding a bit like Donald Trump.

Kremer said ConCons have become opportunities for political parties to flex their muscles because they have the power to appoint the delegates who determine the issues that get voted on; for special interests to advance pet causes that couldn’t pass during a legislative session, giving lobbyists another opportunity to bill their clients; and for politicians to collect an extra paycheck and grow their staffs. The 1967 convention that cost $37 million would cost $300 million in today’s dollars.

And for what? There already exist ways to amend the constitution without the rigmarole of a convention. In 2013, voters approved a constitutional amendment to expand casino gambling.

But ConCons are not to be dismissed lightly. Kremer pointed out that the convention of 1894 had some consequential achievements: Delegates preserved the Adirondacks; Susan B. Anthony and her fellow suffragists highlighted women’s disenfranchisement; the Blaine Amendment passed, banning state money from funding parochial schools.

Convention supporters say it could address thorny issues that the legislature can’t or won’t address on its own—namely, anything that would reduce or enhance its power, like ethics or campaign finance reform.

Gov. Andrew Cuomo earlier this year suggested he’d support a constitutional convention, saying Albany was “broken.” But unless he heeds calls to appoint nonpartisans as delegates, plus retired journalists to solicit ideas and moderate debates, a ConCon will not be worth the money spent putting on the show.